Why we study sediment and sedimentary rocks

"The sediments are a sort of epic poem of the earth. When we are wise enough, perhaps we can read in them all of past history. For all is written here. In the nature of the materials that compose them and in the arrangement of their successive layers the sediments reflect all that has happened in the waters above them and on the surrounding lands. The dramatic and the catastrophic in Earth history have left their trace in the sediments—the outpourings of volcanoes, the advance and retreat of the ice, the searing aridity of desert lands, the sweeping destruction of floods"  -Rachel Carson, The Sea Around Us

We live on a dynamic planet with a mobile outer shell (the crust) that builds the high peaks of the Himalayas,  plows deep trenches like the Marianas, and stretches open immense ocean basins like the Pacific. These processes are challenging to understand because they occur slowly (over millions of years) and are often self-destructive. For instance, mountain belts are subject to weathering and erosion, and ocean basins are eventually subducted beneath the continents.

The image below of the modern surface is merely a snapshot in time. In order to understand the long term evolution of mountains belts and ocean basins, we interpret the rock record of sedimentary basins, which serve as archives (Earth's record keepers) for the evolution of our planet. Somewhat ironically, thanks to plate tectonic processes (including rock uplift), the deposits of ocean basins are often best preserved and exposed in the mountains. These plate tectonic processes shape the Earth into its habitable form, but simultaneously result in major geologic hazards to society such as volcanos, earthquakes, and tsunamis, which remain very difficult to predict. 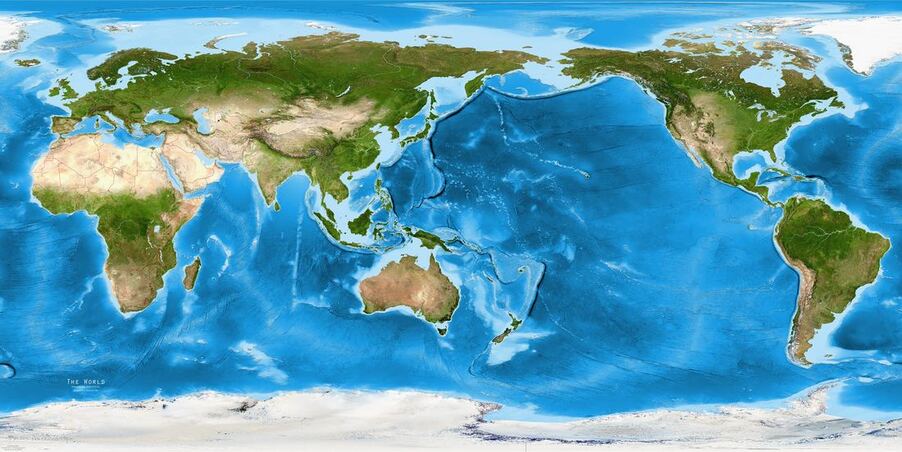 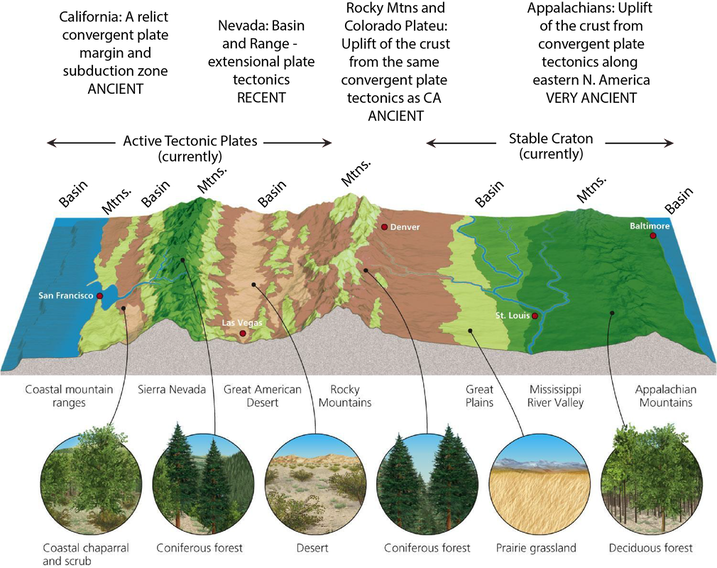 Distribution of biozones along the 39th parallel as a function of climate and precipitation, which is largely influenced by the distribution of topography. Modified from Cengage Learning (2012; Ch. 4, Biodiversity and Evolution)
A transect of the United States showing the distribution of ecological zones in relation to mountain belts (where material is removed), and basins (where that material is stored). In this one example of the modern U.S. topography, a single snapshot in time, you can see the first-order relationships between geology and life.  Over geological time, plate tectonics has redistributed the continents around the planet, adding yet another order of complexity to the role of plate tectonics on the distribution of climatic zones, topography, and evolution of life systems through time. One of the applications of our research is to reconstruct the "paleogeography" of ancient mountain belts and ocean basins.

Society depends on Earth's geologic natural resources (water, oil and gas, precious metals) for life, energy, economic growth, and even political influence. Many of these resources are stored in sedimentary rocks, which are porous and can serve as reservoirs over geologic time scales (thousands to millions of years). Understanding the origin and evolution of sedimentary basins is essential for exploring and accessing the natural resources they hold in order to meet society's needs and the growing global demand. 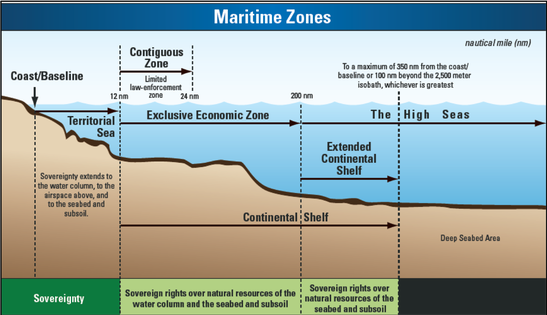 For instance, we are working with USGS scientists to better understand the geologic evolution of the Bering Sea and it's margins, which has important implications for defining our economic borders in this region. This is becoming increasingly critical for resource rich areas such as the Bering Sea and Arctic Ocean. Broadly, such boundaries are based on geological interpretations of the sea floor. You can read more about how marine economic borders are determined here.